​Juxtaposing tradition with innovation this exhibition presents painting, photography, and video by artists from Israel, Holland, Canada, and the United states who build on, respond to, and transform the time-honored still life tradition through the lens of the 21st century.
Most often associated with Dutch and Flemish painting of the 16th and 17th centuries, the still life genre traditionally featured sumptuous tabletop compositions of flowers, ripe fruit, vegetables, seafood, meats, and other objects to portray life’s abundance but also its transience it the face of life’s inevitable end.

Gerry Bannan (American, Roanoke, VA) also sources European Old Master paintings and prints in still lifes that, informed by the engravings of Albrecht Durer (1471-1528) and Dutch Baroque masters, re-draw the still life tradition with ballpoint pens on expansive sheets of Mylar. In these contemporary re-imaginings of the memento mori or vanitas tradition, intricately drawn bones, vines, shells and flowers allude to the transient nature of life and the inevitability of death and decay.

Beyond Real: Still Life in the 21st Century

Moss Center for the Arts at Virginia Tech 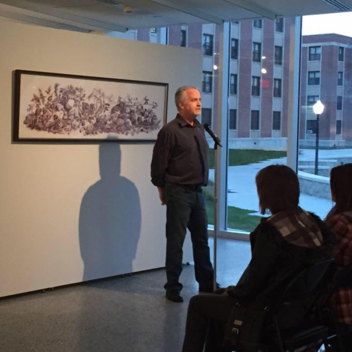